I was going to talk about the New Deal and cook something for y’all, but that will have to wait until tomorrowish.  Because I ordered a pizza and made brownies and couldn’t figure out how the hell to connect pizza and brownies to the New Deal.  So I’m going to tell you my top ten movies/documentaries/shows that have something to do with history.

But first, I got this book in the mail today.  Are you jelly?  I’ll tell you about it after I read it.  Or if it is boring I probably won’t.

Also, what do you all think about the whole Rachel Dolezal pretending to be black thing?  I thought about working up a post about cultural appropriation.  Then I thought about maybe writing about the history of blackface.  Then I thought I should write about how pre-civil rights black Americans sometimes “passed” as white.  But then I realized that this whole thing is way too WTF for me.  And now I have this strange urge to watch Soul Man again.  Except that we’re going to watch Ghostbusters instead.

Anyway, I’m one of those people that nobody wants to watch history movies with because I will pause the movie every five seconds and tell you what really happened.  Apparently being a pompous twit is frowned upon in some social circles.  I actually don’t like most movies set in the past because the inaccuracies irritate me to no end. Most of the movies on this list probably aren’t too historically accurate, but they usually have some other redeeming quality.  Or I possibly have strange tastes.  You decide.

I read Team of Rivals: The Political Genius of Abraham Lincoln by Doris Kearns Goodwin, which this movie was based on. I have to tell you a secret. I don’t really like Lincoln. I think he’s overrated. I feel the same way about JFK (but I heart me some Robert Kennedy). But the movie is worth watching just for Tommy Lee Jones’ awesomesauce performance as Thaddeus Stevens. Also, Daniel Day-Lewis is always amazing.

Do you see the tagline on the movie poster? – “Based On The Incredible True Story”.  It is lies.  Lies, I tell you.  This movie is actually borderline horrible.  But Georgiana Cavendish, Duchess of Devonshire is one of my most favorite historical figures, so I had to include it.  I just love her.  The movie is loosely based on Amanda Foreman’s excellent biography: Georgiana, Duchess of Devonshire.  There is so much more to her than this movie makes her out to be.

In this movie, the Doctor is played by George Carlin, and he takes two imbeciles back in time in the T.A.R.D.I.S. in order for them to learn enough history to pass their final report so that one of them doesn’t become a cyberman and the band Wyld Stallyns can live on.  I think I might have got that a little mixed up, but that’s the gist of it.  They should have just paid Margaret Nordquist two dollars to tell them about it like I did when I needed to know what A Tale of Two Cities was about so I could pass English.  But maybe they didn’t know her.  Then again, if I had a T.A.R.D.I.S., I could have probably gone back in time and just asked Dickens what the hell he was talking about and then spent the two dollars on cigarettes.  At any rate, Keanu Reeves says “Woah” a lot, so the movie is worth watching.

This is a TV movie. Alan Rickman plays Rasputin. Need I say more?  I do need to say more?  How about Ian McKellen plays the Tsar.  Boom. 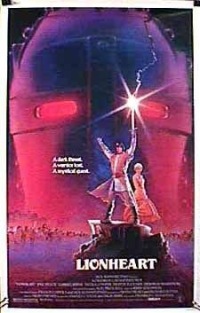 I am pretty sure this movie is about child trafficking during the Crusades. I’m going to level with you guys.  This is an absolutely horrible movie.  Terrible.  But I had the hugest crush on Gabriel Byrne (still do), and I could recite all his lines by heart.  I’m not ashamed.  Mostly.  Plus my brother Jesse and I used to watch this and then go outside and play like we were knights and slave traders with swords and bows made out of sticks and twine.  Yes, we played “child slave traders.”  I was a teenager.  I was a late bloomer.  Don’t hate.

I mean, the book was better.  And shorter.  A lot shorter.  But I kind of think that everybody should either see or read Roots at least once in their lives.  There are so many reasons to watch this miniseries.  1. LeVar Burton.  2. History of slavery.  3. The film as an important contribution to the study of black history during the 70’s.  4. The controversies and lawsuits surrounding the book.  5. There are rumors of a remake in the works.  6. I said so and I know everything.

I’m not really into westerns, but Val Kilmer is totally my huckleberry.  He makes my delicate parts damp.  And Sam Elliot is pretty nice eye candy, too.

Ok, so this is a TV series based on a novel set in Scotland in the mid-1700’s. So it’s not technically historical. However the husband of the main character (the English husband, not the hot Scottish husband) is a historian.  So it counts.  Because let’s face it, we aren’t hugely represented in popular culture.  Plus Sam Heughan looks amazing in a kilt.  And also naked.  Especially naked.

1. The Times of Harvey Milk 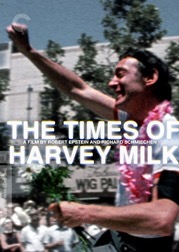 This is a documentary about Harvey Milk.  And it is sosososososososo much better than the movie, Milk.  If you are not moved by this documentary, you might want to see a cardiologist because you probably don’t have a heart.  I cry every time I watch this.  And I’ve seen it a billion times.

This is not so much a runner up as it is that I didn’t really think this list through beforehand and forgot how much I love this movie.  It would probably be in the top five.  Maybe the top three.  It is based in the true story of PFC Barry Winchell, who was repeatedly harassed by his fellow soldiers and ultimately murdered because of his relationship with a trans woman.  Lee Pace plays Calpernia Addams, Winchell’s girlfriend.  This movie also makes me cry every time, and it began my lifelong love of Lee Pace.  It’s a Showtime movie, and the acting is a bit shaky (except for Pace’s freaking amazing performance), but definitely worth the watch.