When I was a teenager, I fell in love with ElfQuest comics. I had picked up an issue of Wave Dancers at the comic book store in Yard Birds, and I never looked back. I diligently hunted down all the other issues, the back issues, the folk music CD, and even the board game – all in pre-Internet days, thank you very much. My first tattoo was the ElfQuest logo. Eventually, I came across the novelization of the original quest, and I read a line in the first book that stuck with me. The elves had lost everything and, with the prospect of losing much more ahead of them, were journeying across a desert into the unknown. The leader of the small pack of elves, Cutter, heard the words “Sorrow’s End” in his head, not knowing that they were actually headed towards an oasis called Sorrow’s End. An oasis that contained a very different tribe of elves along with a new and unexpected future. As Cutter mulled the meaning of the phrase, “Sorrow’s End,” he mused to himself, “Sorrow’s End. There was no such thing. The only end to sorrow is death – and only that of the dying one and not the pain of those who lived on and mourned.” It may not be an exact quote. I don’t have the book anymore. But it is close. And it left a profound impact on me. You could tell that it left a profound impact on me because I doodled the quote on my book covers and in my notebook with a purple pen. Being a teenager, being a sensitive and emotional teenager, with relatively limited experience in death, that quote really encompassed what I knew about death and loss in the small ways that I had experienced it.

The funny thing is, it’s still true now. Diane’s pain is gone. The cancer is gone. But my pain is still here. The pain of the people who loved her is still here. I guess that that eventually gets smaller. I don’t know. I don’t have a lot of experience with this. But I don’t think it goes away completely. And I don’t think the good memories go away either. I hope they don’t. If the pain is the burden you have to bear for the memories, I’ll take it. Pile it on. Because the memories make the pain bearable.

After everything was said and done, the trip home from Reno was much less urgent and much more lonely than the trip there. I was hoping to break up the drive for the kids, so I made a lot of stops. The first stop was in Hawthorne, and there was so much to see there.

If you ever pass through Hawthorne, you absolutely have to stop at the Mineral County Museum across from the McDonald’s. It’s free (leave a donation – don’t be a douche)! It is absolutely the most ridiculous and wonderful museum I have visited in a long time. It’s like falling into a museum looking glass. The displays are random and rarely labelled. Most of the display cases aren’t even proper cases. It is like a warehouse filled wall to wall with… just stuff. You’ll be looking at a shadow box filled with a hundred unexplained keys, and then turn the corner to find lovely examples of early 20th century clothing. Then you will wander into a section of old office furniture and machines that looks like the 1920 Sears Catalog vomited in a corner. I’m pretty sure that they don’t have an archived collection in a temperature-controlled back room somewhere. It’s all out on display, folks. And it’s pretty fucking amazing.

Now, the Mineral County Museum was cool. And we saw a bunch of other cool things in Hawthorne too. I’m going to do a post soon about a couple of Art Deco schools, which are pretty fucking nifty. But none of these things were the coolest. By far, the coolest thing in Hawthorne is the town that isn’t there.

Back in 1933, as part of a New Deal project, a Civilian Conservation Corps (CCC) camp was built in Hawthorne, Nevada. A second camp was built in 1936, and these two camps combined to make up “Camp Jumbo.” The people who worked out of Camp Jumbo worked in cooperation with the forestry service, and the camp was maintained under the US Naval reservation there. When President Franklin D. Roosevelt signed the Selective Training and Service Act of 1940, the first peacetime draft in the history of the United States, the numbers of men volunteering for the CCC diminished as men were drafted into the US military instead. This signaled the beginning of the end for the CCC, which would continue to decline in numbers until the program was officially disbanded after the bombing of Pearl Harbor in December 1941. The camp in Hawthorne was disbanded in May 1941, and the Hawthorne Naval Ammunition Depot (NAD) later developed the land as housing for the influx of military members and civilian workers who relocated to Hawthorne to support operations for WWII. This new housing supplemented existing housing adjacent to the former Camp Jumbo land, which was built by the Hawthorne NAD in 1941 and was known as the town of Babbitt.

In the 1940’s Babbit was pretty much where it was happening. As you can see in the map, it covered a huge area of land. By 1943, it extended 40 blocks and contained almost six hundred 2-, 3-, and 4-bedroom duplexes. Even more housing units were built during the Korean War. Babbitt boasted all of the amenities you would find in any small town (or any large military instillation) – schools, stores, gas stations, a library, a movie theater, restaurants, a bowling alley, a bank. It also had some not-so-awesome things, like segregation. The higher-numbered streets, near the east part of the town, was where the black families lived. There’s a really good interview of Carmen Head, a former black resident of Babbitt, on the Our Story, Inc. website. In the interview, she talks about growing up in Babbitt, segregation in Hawthorne, and how even small towns play a part in the larger narrative of black history. It’s a good read, if you have a couple minutes.

So what happened to Babbitt? Well, it’s not there anymore. Most of the houses were removed in the 1970’s and were shipped to new owners throughout Northern Nevada. Some are still in Hawthorne on different plots. Some have been spotted in Fallon and some even in Reno. If you want to see Babbitt today, you will turn into the Whiskey Flats RV park, just before Hawthorne (if you’re coming from Reno), and drive all the way through the park out the back gate. The roads are still there – pitted and cracked with weeds sprouting through the asphalt. But all that remains of the home sites are uneven layers of foundation, sprawled across the ground like giant headstones, concrete reminders of the lives lived there.

The point I wanted to make about Babbitt is that people lived there. They really lived there. They slept and worked and went to school and fell in love and married and died there. The same things that you and I do. For a time, whether long or short, their lives were anchored in that one place. And even though that place doesn’t exist anymore, you can still see the remnants of what was left behind. And you can still feel the whispers of their lives in the air. Cities rise and fall, landscapes change, lives are born and crumble into dust, but the essence of all of that lives on. You can always see it if you look hard enough.

When I was a kid, probably early teens, I was really into the English Romantic poets, especially Byron and Shelley.  I could recite “When We Two Parted” by Byron from memory. Still can, and will gladly do so upon request, although I admit my oratory skills are lacking :p And of course, I loved “Ozymandias” by Shelley.

I met a traveller from an antique land
Who said: “Two vast and trunkless legs of stone
Stand in the desert. Near them, on the sand,
Half sunk, a shattered visage lies, whose frown,
And wrinkled lip, and sneer of cold command,
Tell that its sculptor well those passions read
Which yet survive, stamped on these lifeless things,
The hand that mocked them and the heart that fed:
And on the pedestal these words appear:
‘My name is Ozymandias, king of kings:
Look on my works, ye Mighty, and despair!’
Nothing beside remains. Round the decay
Of that colossal wreck, boundless and bare
The lone and level sands stretch far away.

Who doesn’t love the story about Ramses II (a.k.a. Ozymandias), his pretensions to greatness, and the inevitable decline of his empire into nothingness. The lesson of the poem is that as great as you think you are – as great as you might be – eventually there will be nothing left. You ain’t hot shit after all. But, you see, when I was a kid I always got it all wrong. For me, the story behind “Ozymandias” wasn’t about how there was almost nothing left of this great huge empire. It was about how there was still something left of this great huge empire. Maybe it’s just the barest bones – the trunkless legs, shattered face, and plaque – and maybe the great empire has disintegrated into the lone and level sands. But something is still there. And the rest is waiting to be found. 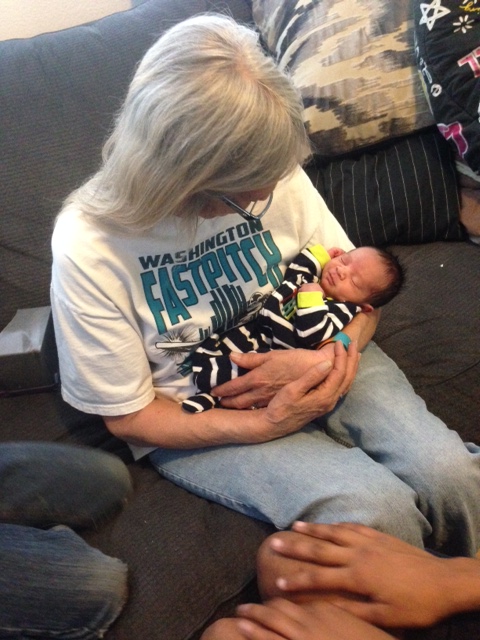 Doodle and Diane; Beginnings and endings.

That’s what’s so comforting about history. Nothing ever really leaves us. We might come from stardust and return to it, but in the meantime everything that ever was is still there, just waiting to be uncovered.

Right now, my memories of Diane are buried by my grief. But those stories are sitting under the surface. And even though it’s hard to see them through the sadness, they are there – sometimes with mesmerizing sweetness and sometimes with painful eagerness – waiting to be held in the hands of our memory, waiting to be enjoyed and loved on and treasured again. And those stories are intertwined with the stories of my life. Stories that shaped the person I am, and stories that are still shaping who I become. And, if you knew her, those stories are intertwined with your lives. And although she’s gone, she can never really die. Not as long as her stories are a part of ours. Not as long as her love still comforts us. And not as long as her memories remain.

So I’m going to honor her the best way I know how. Not by telling her stories. Because these stories in this blog are for me, not for her. They are to help me sort through my grief, and maybe to help you if you find comfort here. No, I’m going to honor her by making my story the best it can be. Because her story is a part of my story, an important part of my story, and I have a responsibility to the part of her that is still with me. Because she was, at her most basic, a giant beacon of love wrapped up in human skin. And I think that’s what she would want for me. I think that’s what she would want for you. So I will remember her, and I will cherish those stories of her, and I will wrap myself tight in the memories of her, and then I will go out into the world filled with love and anticipation and I will write the best god-damned story I can write for my life. I hope you will too.

So, as the Eleventh Doctor once said, “We’re all stories, in the end. Just make it a good one, eh?”

2 thoughts on “Diane and the Desert: Part 3 – Hawthorne and Ozymandias”