I have a handful of posts I want to make about the time I lived in Las Vegas. Mostly road trips – Manzanar, Mountain Meadows, Rhyolite, and Tonopah. But it came up in my facebook memories that I left Vegas a year ago on Jan 2nd, so I thought it would be a good time to talk about the road trip and all the shit we saw on the way.

We had originally planned on leaving Vegas on Jan 1, 2019, and we planned a route that avoided Denver cos of snow. Turns out New Mexico and Arizona get snow too. Who the fuck knew? Because of dangerous driving conditions, Lipstick and Buzz and their crew let us crash an extra day with them, so we ended up leaving the next day. Let’s be honest, I wasn’t gonna complain about extra time with the Lipstick Gang.

On our first day, we got a late start and drove almost straight through to Gallup, New Mexico. We didn’t stop much at all because we were trying to rush through a window between two snowstorms.

On Jan 3, we drove from Gallup to Amarillo. We passed through the Continental Divide, which is the largest hydrological (big, fancy word) divide in the US. Basically rain and water and shit on the west side of the divide drain into the Pacific, and water on the east side drains into the Atlantic.

A lot of our driving on days one and two were in the vicinity of old Route 66. We couldn’t help stopping at Russell’s Travel Center, which is a truck stop with a diner, chapel, convenience store, and of course a pretty rad museum. They sold yellow cotton candy that was labelled as Donald Trump’s hair. I didn’t eat it cos eew, but it made me giggle.

The museum at Russell’s was centered around cars, and there were several there that made Middle Little squee in excitement. Surrounding the cars were a ton of fifties paraphernalia and Route 66 memorabilia. There were pinup girls, soda machines, racing flags, and pretty much anything else you could think of. It is worth a stop if you’re going through the area.

On Jan 4, we woke up in Amarillo. One of my favorite country songs is George Strait’s “Amarillo By Morning,” so it did give me a little thrill to wake up there. Our first stop was Ozymandias on the Plains, which is a statue that is an homage to Shelley’s Ozymandias. I talked a bit about the poem in a previous blog post that you can read here.

I met a traveller from an antique land…

We heard about the statue from Atlas Obscura, which I scoured during my trip planning phase in search of weird and fun things to see. The statute was created by local artist Lightnin’ McDuff, who was especially known for his found object art and unique sculptures. He passed away in 2018. It was one of several art pieces sponsored by Stanley Marsh 3 (he preferred the 3 instead of III) who is often referred to as a businessman and philanthropist and art lover. He’s most known for sponsoring the Cadillac Ranch, which is a sort of car-henge art project outside of Amarillo. I guess they talk up those things because it gets a little awkward if you bring up how he sexually abused kids pretty much his entire life.

We also stopped at another weird art installation outside of Amarillo called The Stoner Patriot Peace Garden of All Faiths. It’s kinda in the middle of nowhere, but Roadside America has information on how to get there. It’s pretty easy to find, viewable from the freeway and accessed via a frontage road. Not really much is known about the creator, Richard Daniel Baker, but a fellow blogger shed a little light in this post, where she prints a letter by one of the folks involved in the project. I don’t know if I can adequately describe how odd and awesome and moving it was to be there, so I’m just gonna photo dump and hope that some of the essence of the place shines through. 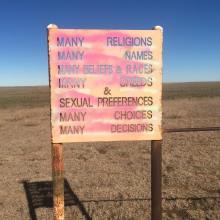 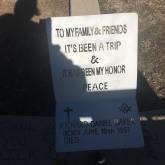 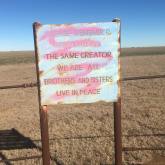 We missed the Cadillac Ranch in Amarillo, but managed to stop at the VW Slug Bug Ranch in Conway, Texas. I couldn’t find any information about the instillation, and the closest building was an abandoned hotel/store that looks like it shares a property. It’s pretty much exactly what it sounds like – a car-henge of VW Bugs planted face first into the ground at a 45 degree angle and covered with graffiti. There was an abandoned shed and a bunch of used tires nearby. It was a cool place to nose around and take pics.

Our last roadside attraction in Texas was the Leaning Water Tower in Groom. From its inception in the 1920’s, Route 66 was the biggest highway in the US until Eisenhower’s Interstate Highway Act in the 50’s heralded improvements the would eventually replace the old route. Route 66 crossed 8 states, went through three time zones, and covered almost 2500 miles. It wasn’t called the Mother Road for nothing. Entire industries sprang up around catering to travelers along the highway, and many businesses used gimmicky marketing ploys and quirky attractions to draw travellers to their businesses.

In Groom Texas, Ralph Britten dreamed up the idea of a leaning water tower to draw people to his truck shop. He bought the tower, and placed it into the ground at an angle, balancing it on two legs and filling it just enough to keep the center of gravity low. That’s probably a really dumbed-down version of whatever math or physics went into that, but I studied history and that’s the best I can do. Anywhoo, it worked. People would come into the truck stop, panicked, and tell him that his water tower was about to fall over, and he’d laugh and sell them some gas or talk em into buying food or whatevs. Using the water tower as a draw worked and his truck stop was really popular until, strangely enough, it burned down. The tower’s still there, though.

The Leaning Tower of Water

On January 5, we went through Kansas. There’s not much to say about Kansas. At this point we were close enough to Nebraska to just want to get there.

On January 6, we made it to our new home in Nebraska.

I have so many cool Nebraska experiences that I want to tell you about, but I’ll have to save that for another day. I’m too busy living… the good life. 😉

Coming up very soon will be a collaborative blog post with one of my favorite people, Elaine Eshelman, about our trip to Manzanar. You’re gonna love her. She’s a rogue anthropologist, a writer and an activist, a loud-mouthed rabble-rouser, and a general all-around badass. I can’t wait to do this post with her. Until then, check out some of her other stuff. You won’t be disappointed. As part of The History Explorers (https://www.facebook.com/thehistoryexplorers/) she posts youtube videos where she teaches her daughters the actual, factual history that often gets left out of schools. She also runs an amazing collaborative writing page called Shorties (https://www.facebook.com/shortiespoetryandprose/). You can check out some of her more personal thoughts on her blog Living In Outer Space (https://livinginouterspace.blogspot.com/).